The Wisdom of Pooh

Home/Uncategorised/The Wisdom of Pooh
Previous Next

The Wisdom of Pooh 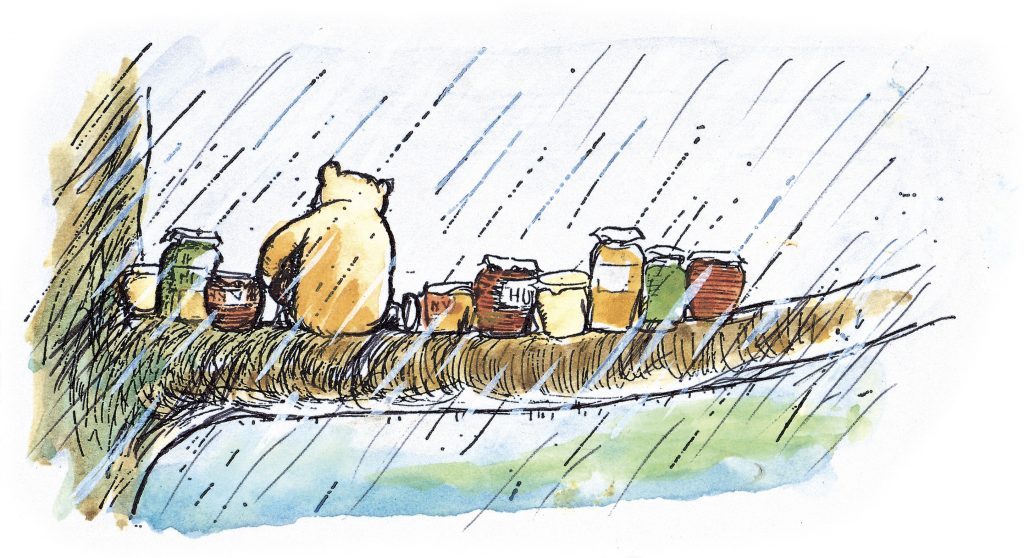 As a post graduate trained biologist and a former teacher of psychology, I get incensed by the approach of so-called experts to the obesity problem. I have a vested interest, despite exercising almost daily and being unable to recall the last time I ate chocolates or a cake, I have a BMI of 29. With an idea borrowed from Benjamin Hoff I have attemped to explain how the approach of the media makes me feel..

“Christopher Robin” said pooh in a confused tone, “Kanga says, according to recent guidelines I’m overweight, and I need to lose some fluff and stuff from my tummy because my FMI (Fluff mass index) is over thirty and I am in danger of bursting a seam”

“Uhuh” said Christopher Robin knowingly, inviting Pooh, who had become distracted by a passing bee, to continue.  Pooh gazed at the bee and its potential for honey with awe and began to follow its meandering from flower to flower with one of his own…Each time he got near to its deliciousness the bee, noticing his black, shiny, wet nose buzzed off to the next flower in annoyance. Within a couple of minutes they were both nearly out of earshot and Pooh had forgotten about his complaint.

“Pooh!” shouted Christopher Robin, “You wanted to tell me about your FMI?”

“Oh yes,” said Pooh skipping back to his side and landing heavily on the grass beside him.  “I am confused…I am a teddy bear right? Well, aren’t teddy bears supposed to be “roly poly” with a good bit of fluff and stuff in their tummies, and in their heads for that matter? Have I always been this way? or is it my fault, because I eat too much as Kanga says?”

Christopher Robin scratched his head and thought hard. After a minute he cleared his throat as if he was about to say something really important. He depended his voice, just like his father did when he was the harbinger of bad news about such things as bed time, baths and going to town buy new shoes:

“Well pooh, it’s like this, Kanga probably as a point, your FMI is too high, and you are in danger of bursting a seam or worse still popping an eye out or  even getting stuck in Rabbit’s front door again” but just like his father,  as he noticed the distress on the face of the one he hoped to guide, his tone softened and he tried to take the sting out of his own words. “Look here young bear, as far as I remember, you have always been fat and that is why I like you. As far as I am aware all teddies are fat.

Pooh looked up at him with an air of bemused confusion. How could it be right for a teddy bear to be as he was supposed to be yet also be in danger of going “pop”?

“Mmmm” Christopher Robin continued,  rubbing his chin and stroking a non-existent beard, as he had seen his grandfather do to his long, white whiskers when he was contemplating an intractable problem such as how to tell his wife of forty years that he preferred scrambled eggs to kippers for breakfast:  “I don’t think a thin teddy would be much use since its potential for cuddle and comfort is proportionate to its FMI”

Warming to his thesis, he continued:

In fact,I think that a thin teddy would get left in the shop and even if it  was bought and given as a present, it would probably be placed in the bottom of the toy box with  the building blocks and would only come out when cousins come to play and one has to have a tea party” Christopher Robin shuddered at the thought and began to look quite miserable , if only for a second. But Pooh’s depressed feeling deepened and  he placed his paws under his chin, he heaved a big sigh. “You know what made it worse CR ?”

Christopher Robin shook his head and gave the bear a kindly squeeze.

“Tigger was there, and Kanga was serving him a pile of pancakes with cream and strawberry jam which he managed to get all round his mouth before he licked the whole lot off with one sweep of his enormous tongue” The reference to the tongue was said admittedly with a degree of envy. “Kanga said he could have them all, even my share because his FMI index was only 24. How come Tigger isn’t Fat Christopher Robin? We both run around in the Hundred Acre Wood, play Pooh sticks together and ‘splore. And he is eating all the time, but he never gets fat?”

And dear reader, because this is the Winnie The Pooh of A.A. Milne,  rather than Disney, we know that whilst fairly excitable, Tigger indeed was not much more energetic than his play mates of kanga, Roo, Piglet, Rabbit, Eyore and of course Owl. And it was indeed indubitably true that Tigger ate far more than Pooh.

Over the next few days it appeared to Christopher Robin that this problem wasn’t going to go away by itself, Pooh got more miserable and  as the  shuttle diplomacy between Kanga:  asking her to be more sensitive and asking Pooh to eat less completely failed.

Kanga’s response was that she was a concerned expert on all aspects of food and diet and besides ‘fat teddies’ could be a ‘bad influence’ on Piglet and Roo who were themselves only small and not yet fully grown. If they were ‘exposed’ to such ‘bad influences’, then they might get fat too.

The end result of Christopher Robin’s intervention was that Roo and Piglet were forbidden by Kanga,  to “hang out” with Pooh unless he lost some weight.

Pooh for his part tried to give up honey, but we all know how that turned out.

In the end Christopher Robin went to his father’s library and being a pre school child of extraordinary ability and precocity, he found a book by Mr Charles Darwin called “On The Origin of the Species”. Inbetween naps in the sunshine he studied hard and about a week later he and Pooh reconvened their meeting, under the same tree in the warming spring sunshine. Lulled gently by the sound of buzzing bees and warring blackbirds calls he began to ‘boysplain’ to the eager bear.

“I’ve read a book Pooh and I think I understand how teddies and indeed humans became fat, and its not their fault. You see its all to do with a thing called “survival of the fittest”! Long ago, long ago, when we all lived in caves and wore skins and carried big spears, before there was a grocery delivery and the word delicatessen didn’t even exist, or even any language for that matter, food was in short supply and people often didn’t get to eat for days”

Pooh gulped “not even a little s 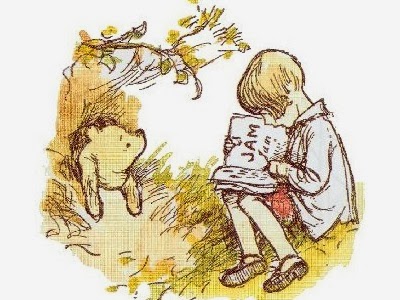 “No, not even a biscuit or a glass of milk” nodded Christopher Robin

“In those days people and bears who could store energy in the form of fat or fluff I the case of teddy bears, had an advantage. In times were there was no food they could live on fat they had stored in their tummies. Whilst thin people would become weak and die, fatter people could survive better and because of this have more babies”

Neither pooh nor Christopher Robin wanted to dwell on how babies were made, suffice it to say more babies were born to parents who could store fat.

“these babies would have the same characteristics as their parents, an ability to store fat for ‘just in case times’ whereas the thin people wouldn’t have the energy to make babies and would have fewer of them. Mr Darwin called this ‘evolutionary advantage’ meaning that the fat people, and of course fat teddies, would be more common in the surviving population since they were the survival of the fittest. So most people have bodies which readily store fat”

Poohs face showed a smile but his eyes were glazed in an utter lack of understanding.

“And it gets worse…” said Christopher Robin

“worse ?” said pooh with a touch of echolalia he found useful at times.

“My cousin Guinevere who is down from Cambridge studies psychology and she saw me studying and told me that since Mr Darwin’s times there had been some discoveries about things called genetics and psychology. She told me that the thing which passed on the information about fatness were called genes -spelt with a ‘g’ not a ‘j’ and these affected your brain too. You see people’s brains are also programmed by genes to eat as much as possible because in the zone of evolutionary adaptation, you never know when your next meal would come so a degree of greediness and love of fatty, sweet foods which are high in calories meant you were more likely to survive”

Pooh asked the only sensible question he could think of “were cave men fat?”

“Nooo you sill old bear! They were not because all food had to be caught and killed so it was in short supply.”

Pooh busied himself with a picture of a hairy cave man chasing a biscuit with a spear and just said “oh”.

“But the problem is nowadays food of all sorts is in common supply and we don’t even have to hunt for it. Even mummy gets a deliver from Fortnum’s and she just has to ring them. Not spear in sight. Guinevere called it ‘an obeseogenic environment’”

Pooh smiled, he thought he would like an “obesogenic environment” as long as it had ballons and plenty of soft cushions.

“So pooh you can’t help being fat. Its your genes and your psychology”

The boy, having given his first lecture was completely elated. So he jumped up put his hand in the paw of the bear and with effort, raised him t is feet

C’umon Pooh, we have to tell Kanga and get her to be kinder to you.

Pooh stopped in his tracks as he had an epiphany as bright as lightening. He pulled back on the boy so hard he skidded to a halt on the soft, wet, grass.

“you mean when experts make pronouncements about people and bears who are genetically programmed to be fat they are being unfair ?”

“I think I know a term to describe that Christopher Robin”

“silly old bear” said Christopher Robin and they headed off to start their own quiet and kindly revolution in The Hundred Acre Wood.