Lionel Blue, made me laugh but more important, he made us all think

I am sad to say I only have one thing in common with Lionel Blue, I wish I had more.  Famous for his contributions to “Though for the Day”  a lonely  and  generally the most unappreciated gig  for any person to do.  He had  a brief to make religion relevant in a largely Godless age. For most contributors people I guess, just tuned out,  even if it was a blessed relief from John Humphrey’s hectoring or Sarah Montague’s inane babbling.  But everyone, and I mean everyone, no matter what religious belief they professed,  stopped and listened to Lionel Blue, the humane and kindly Rabbi with a smile you could hear in his voice, and a groan-worthy sense of humour that miraculously made people laugh one their way to work even on a Monday morning!

Born in London before the war, he found the events of the holocaust a challenge to his faith and lost it entirely when a prayer to remove Adolf Hitler was ignored.  Entering Balliol College he regained it at a Quaker meeting where he managed to resolve his inner turmoil about his faith and and his sexuality. He became a rabbi in 1960 and the rest is history.

Lionel Blue faced life’s challenges including depression and physical illness with great courage  and humour. I for one, will miss him because the world w 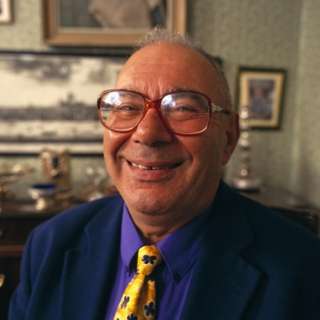 as certainly a better place with him in it.  It wouldn’t be right to end this piece without a classic Blue joke so here goes:

A man of great faith was caught in a flood and climbed on the roof of his house and prayed to God to save him.  A short while later a lifebelt floated past  but the man didn’t reach out for it because he had faith that God would save him.  Then later, as the flood water rose ever higher a man with a dinghy  asked him if he wanted help to which the man replied “It is OK, God will save me”.  He prayed some more and as the flood waters rose up to his chin a helicopter came  and they offered to winch him aboard to which he  shouted above the din “No its OK God will save me!”.  A little while later, the man drowned.  As he got to heaven he stood before God and said, “I had faith and you didn’t save me!” God replied “I sent a lifebelt, a boat and a helicopter,what more could I have done?”

And by the way, it is Quakerism which we have in common, just in case you  were interested!