Chicken Soup For The Soul

Home/Uncategorised/Chicken Soup For The Soul
Previous Next

Chicken Soup For The Soul

I have recently been watching a Netflix series called “The Good Place” and it is hilarious.  The premise is a young woman called Eleanor ends up in a form of heaven by mistake and the ramifications in the fabric of the universe cause physical disasters. Anyway, in one scene there is a perfect restaurant where each guest is served their favourite meal- their chicken soup for the soul,  and the hapless Eleanor gets nothing because the favourite meal of the “real Eleanor” was the hunger strike she went on to protest human rights.  As well as exercising my cheeks from laughing the programme made me think about my favourite meal. 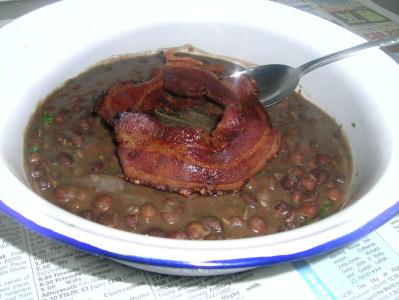 My chicken soup for the soul doesn’t contain any chicken at all. It was grey pea stew cooked by my granddad Tom Cartwright.  I think it is a traditional Black Country Recipe based around a dried pea or lentil which was blackish brown in colour before being cooked, along with bacon bits and onions.

The whole process took around a day and a half and would start with my granddad disappearing to shop – my gran was disabled with arthritis and couldn’t walk – and come back with a tightly packed brown, paper bag containing “gray pays” and a tablet of bicarbonate of soda. These would be put on to soak for 18 hours to be re-hydrated.  Early next morning, the remaining liquid would be rinsed away, and my granddad would cut up the strips of streaky bacon and the onion and fry them in a big pot with a type of fat I would balk at using now. In would go the grey peas now twice their original size having taken on so much water and then masses of hot water from a kettle and the stew would cook for hours. Sometime around 1pm we would sit down to the feast.  There would be enough for about eight people crammed around a little Formica dining table, in a room with badly painted steel window frames, with a radiogram  the size of a suitcase that my uncle bought back from Germany after his National Service there.  I haven’t cooked the meal since became a vegetarian thirty years ago, but the memory makes me smile still, us all there frozen in time, sharing food.

You see chicken soup for the soul isn’t about food, it’s about soul.

The history of grey pea stew and a recipe can be found here:  http://www.foodsofengland.co.uk/greypeasandbacon.htm