Cair For The Whale

Home/Uncategorised/Cair For The Whale
Previous

Cair For The Whale 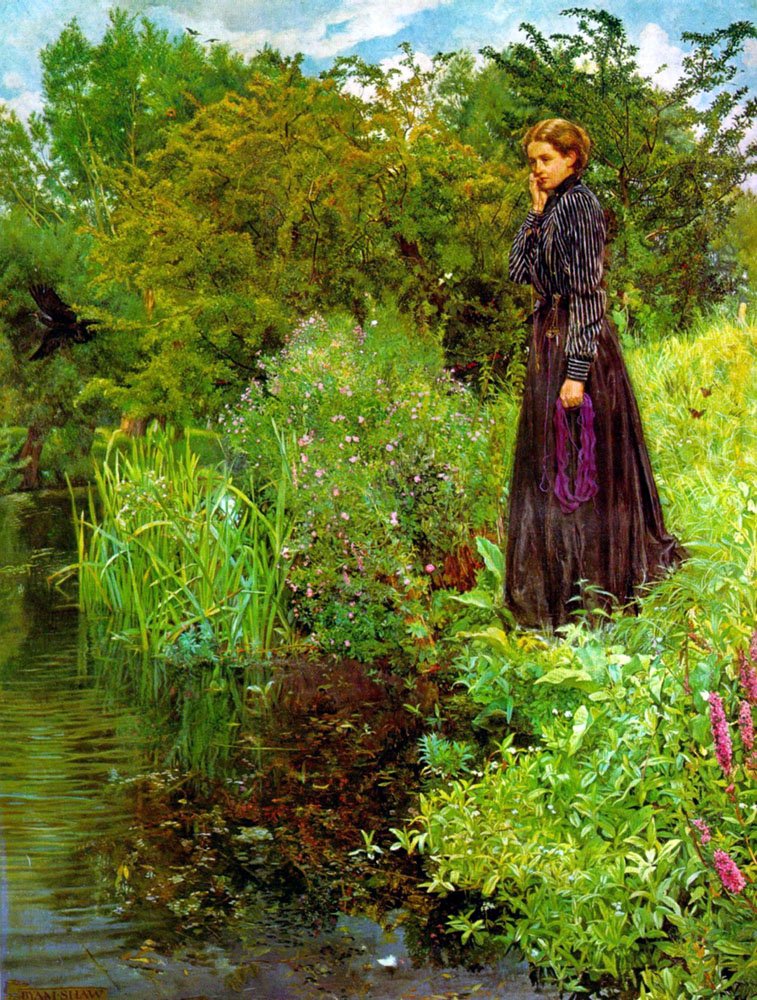 An easterly wind swept along the coast, wheezing and rattling through the old sash windows and breathing life into the dying embers of the fire. The mantle clock chimed twice as the house seemed to sigh of a portent of things to come…

To be honest, the whole place seemed more like a setting from one of those living museums she had been forced to visit as a child. Wooden everything, full of dusty, faded, furniture that had seen better days, just like those her Dad, had loved in his addiction to yesteryear:
“it’s your heritage love, when things were solidly made and lasted, not like this stuff today” he would say, often.
Whilst she hadn’t been too upset, such visits got in the way of her chief interest of reading and imagining herself cast as a dowdy governess, or fiery older sister being wooed by Colin Firth. Her addiction led to a degree, and a role as a freelance writer. She eked a living writing the life stories of older people who wanted their little piece of history, to demonstrate their existence, long after their clean bones had gone.
Smiling, she shook her head at the circularity. She had started her life with artefacts and now she was writing them. A tiny shard of coal fell into the hearth and turned from weak, red pulsating mass to fragile, wispy, grey, pumice. The distraction made her turn attention back to her surroundings. The bed was a real feather one, without springs and solid in all the wrong ways. The room had oak panelling which had faded to a nicotine brown with two, darkened oil paintings decking he wall. The subjects, dogs, peered out of the Stygian gloom as if trying to escape their prison. Heavy, green, velvet curtains framed watery, irregular panes of glass. There was, no electricity upstairs and save the embers, streetlights through the window were the only illumination.
Business had been slow, the pandemic had wiped out many chances to travel and meet people, so when a Miss Cair rang the week after lockdown ended, offering her the chance to ghost-write her autobiography, with a £5000 advance,(paid into her bank account by transfer the same day), she jumped at it. The one drawback was that she would have to travel up from Norfolk to a place she had never heard of called Withernsea. The journey, when she made it, was tortuous and arriving, it was as if she had travelled back through time. Workmen appeared to be constructing a pierhead, something she felt that only Victorian’s did. She was however, suitably reassured by their modernity of their vehicles, and their music blaring out!

She had chatted quite a while on the ‘phone with Miss Cair who had explained that she wouldn’t be there to welcome her as she had another pressing engagement but would leave the house open (apparently, she reassured, there was an extremely low crime rate) with a bite of supper and relevant background documents for her to read. All being well, she had concluded, they could spend the following day together, recording their interview.
Eating the quaint sandwiches and the oldy-worldy cake, she had become too tired to make a start on the large tin of documents her employer had left. Heading upstairs, she noted the original William Morris wallpaper which complimented the whole arts and crafts feel of the house. Undoubtedly, the most beautiful item was the pre-Raphaelite painting of a fearless looking young woman in a scarlet robe, armour and with cascading brown hair. The bedroom had a grate, complete with fire.
Dozing, she had woken to a flare streaking across the sky and shouts coming from nowhere. Seeing the commotion clearly, she grabbed her shoes, and with everything illuminated pink, she ran downstairs and out on to the beach where a woman was singlehandedly trying to keep a small pilot whale from beaching itself. After a Titanic struggle, the animal was turned away from shore. But as victory was in sight the woman with the long, white, hair disappeared under the waves, knocked by the clumsy, gentle, animal. The events which followed were never really clear, but much, much, later the crowd on the beach parted, like a tableau revealing the dead, drowned, woman, hair now matted with sand and seaweed looking like a venerable mermaid pulled from her element. 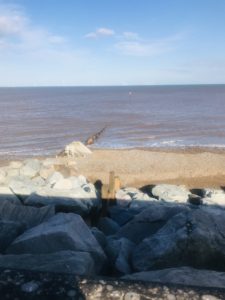 The beach where Mary helped the whale

Slowly, turning away she thought: “death is never a spectator sport”. By now the day was dawning and a weak sun rose over the palid sea, now calmly rolling and respectful. Crossing the road, she was completely disorientated. Where was the house? It was gone! Panic set in as she ran up and down, but all she could see was gap and an overgrown garden with two buttressed houses ether side. The gate creaked as it had done the previous evening as she walked up the path. As if by magic, her overnight bag and the large biscuit tin of documents sat there. Dazed, she held them as a passing dog walker saw the picture of the lighthouse on the lid. Pointing, he said:
“That’s our museum, and a good place to get a drink and a slice of Margaret’s carrot cake!” 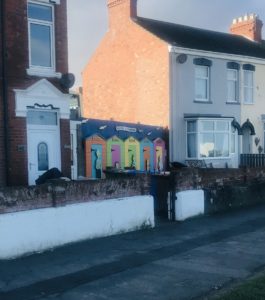 This is the site of Mary’s house in the strory, it is a space between houses where now there is on;y a wall and a garden

An age later, she stood cake in hand, reading faded copy of The Withernsea Gazette headline from October 1931 mounted on the museum café wall. It detailed the fate of a Miss Mary Cair, drowned rescuing a pilot whale. A prominent suffragette she had been first Lady Mayor of the town. Despite her spinster status, she had at one time been a great beauty and had been painted by Byam-Shaw twice, once for his Boer war study in grief and later, as a mythical, warrior-queen. The article also detailed her campaigning spirit and care for animals in general. 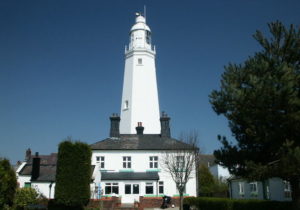 The wonderful Withernsea Lighthouse Museum, packed to the gunnels with local history and where you can indeed by the best carrot cake which I have ver tasted, baked by Margaret of course!

Just then, her phone rang.
She recognised the frail but firm voice of her employer
“Do you have enough material to work with?”
“Yes” she replied, and the line went dead.
“But where shall I begin?”, she said to no one at all.

This story is dedicated to my beloved, inspiring, primary school teacher Miss Mary Cair who died from Covid last year, aged around 87.